The Pilates method of body conditioning is a unique system of strengthening and stretching exercises developed by a brilliant gentleman named Joseph Hubertus Pilates. These exercises are performed on the equipment Pilates invented, some more than a century ago! He is considered by many as the first physical therapist,  before the physical therapy industry was developed after World War 1. Joseph Pilates was born near Dusseldorf, Germany in the year 1883.  He was of Greek decent.  His father was a prize winning gymnast and his mother was a naturopath—which likely influenced his life’s path of pursuing fitness and well-being. He was a sickly child, suffering from a multitude of illnesses resulting in muscular weakness. Determined to overcome his frailties, he devoted his life to becoming physically and mentally stronger. He studied yoga, martial arts, Zen meditation, and Greek and Roman exercises. Pilates called his method of movement “Contrology” or muscle control, to highlight his unique approach of using the mind to master the body. He was so successful in his practice of mental and physical fitness he became a model for anatomy charts by the age of sixteen. 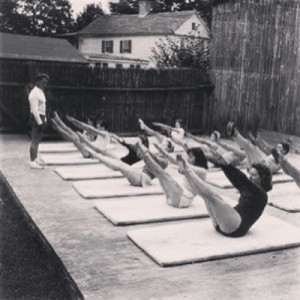 Pilates traveled to England in 1912 to pursue boxing. In 1914 World War 1 broke out and he was interned in Lancaster, England in a camp for enemy aliens. He taught his method to fellow internees and successfully maintained their health through the deadly influenza pandemic of 1918. Legend has it that not one single person in his charge fell ill to the disease! During the latter part of the war Pilates served as an orderly in a hospital on the Isle of Man, where he began working with non-ambulatory patients. Using the only equipment he had, he attached bed springs to hospital beds to assist the movement of the patients’ limbs. The staff noticed the patients in Pilates’ care improved more quickly than others not using his system. These spring based exercises became the basis for the apparatus Pilates would later design and build.

After the war, Pilates immigrated to the United States. On the boat trip over, he met his future wife, Clara, a nurse. Together they opened a fitness studio in New York and used the equipment he invented to teach his Contrology method.  In the early 1930’s popular dance artists and choreographers such as George Balanchine, Martha Graham and Jerome Robbins embraced Joseph Pilates’ exercise method. Dancers, who often suffered from injuries resulting in a long recovery, used Pilates training skills to provide faster rehabilitation to their injuries. It was not long before the dance community at large adopted Pilates’ method of training. In recent years his method has been discovered by athletes, models and actors desiring strong, lithe bodies.

Pilates authored two books, entitled Return to Life, and Your Health. He is quoted as saying “With body mind, and spirit functioning perfectly as a coordinated whole, what else could reasonably be expected other than an active alert, disciplined person? Moreover, such a body freed from nervous tension and over-fatigue is the ideal shelter provided by nature for housing a well-balanced mind that is always fully capable of successfully meeting all the complex problems of modern living.”

Joseph Pilates died at the age of 84. His studio caught fire in 1966, and he tried desperately to save his precious equipment and many of his valuable blue prints and documents. Much of it burned in the fire and it is said that he died a year later of a broken heart. Fortunately, his work lives on through his timeless inventions and methodology of movement. Many of his original students, known as the “Elders” or first generation Pilates teachers, carried on his method after his death to continue the Pilates legacy.  Out of the handful of first generation teachers, there are still several living and teaching, including Mary Bowen and Lolita San Miguel. No longer known as Contrology, the name of his mind-body fitness regime, is now known simply as Pilates. The word in Greek means “multi-layered” – a fitting description to his system of training. In the late 90’s core training became a trend in the fitness industry, and the Pilates method caught fire. Today millions of people throughout the world are doing Pilates. Those practicing the method understand breath control is its foundation. Layered upon this is concentration, control, centering, precision, and flowing movement. Each principle builds upon the next, yet relies upon all the others, to provide a unique system of training embracing the mind and the body toward the goal of total fitness.